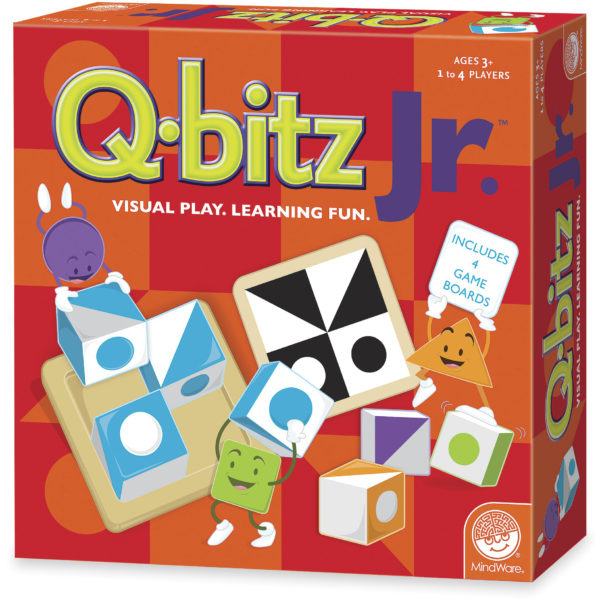 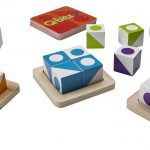 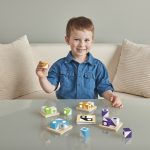 Q-bitz Jr. is a fun way to introduce your child to pattern matching, spatial reasoning, problem-solving, visualisation, and more.  The engaging play is easy to learn and mastering it will give your child the visual intelligence needed for future math and STEM success.  A complete parent guide offers more ways to play with Q-bitz Jr. cubes to foster additional learning and visual dexterity. Plus, it’s so much fun, your child will want to play again and again!

The gameplay is simple: each player receives a set of four same-coloured cubes and a sturdy wooden tray.  When someone turns over a pattern card, it’s off to the races as players simultaneously try to recreate the pattern with their set of cubes. The first player to match the card shouts “Q-bitz!” and wins the card.  A round of rolling the cubes adds more luck and excitement. The player with the most cards after six rounds wins the game!

Observation and Memory Looking at objects closely and critically and having a good memory are key factors to successful learning in so many areas. Learning to read and spell relies on the ability to differentiate letters and sounds and remember their order in words. As your child grows, a good memory will help them solve math problems quickly by recalling basic math facts. Future success in history, science, music and so much more relies on a good memory.

You can use Q•bitz Jr. to help improve your child’s memory in several ways. Play the “what is missing” game by placing several different cubes on the table. Ask your child to cover his eyes while you secretly remove one cube. Then ask your child to uncover his eyes and identify which cube is missing. You can also play this game in reverse by adding a cube while your child’s eyes are covered. Then ask him to identify what cube has been added. When your child is ready, play Q-bitz Jr. according to the rules but turn the card face down after your child has had time to examine the puzzle card. See if your child can recreate the pattern on the card from memory!

The video below demonstrates Q-bitz, a more advanced version of Q-bitz Jr.